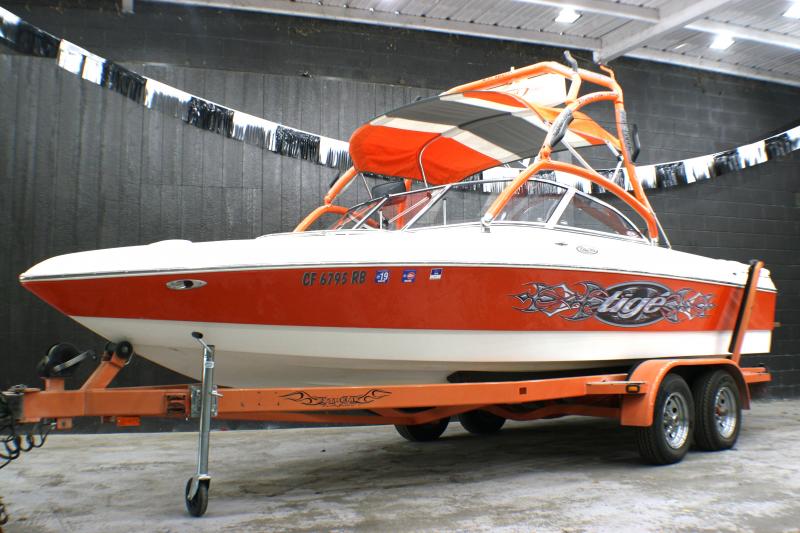 2004 TIGE' 22I
AWESOME is the best word to describe this 2004 Tige' 22i! Tige' has emerged as one of the most respected names in specialty watersports boats and has always put their designs and attention to quality, at the top of the food chain.

This 22i is a neat boat that should surely be a consideration if you like to ski as much as you like to wakeboard, this multi-species boat which gives you the ability to enjoy both activities. With the TAPS plate set in the up position, the non-planing hull settles into the water at boarding speeds and plows out a wake made for catching big air. The push of a button adjusts the TAPS plate down, which lowers the bow, raises the transom and delivers instant planing. Running it up to waterskiing speeds delivers a faint slalom wake that carvers of the first order would drool over. Push the button to adjust the TAPS plate into wakeboard mode and the bow cames up and the transom slides down to push out a very respectable ramp with nice form and shape. Further adjustments of speed and the TAPS plate allows for change in the shape and amplitude of the wake to suit skill levels that range from beginner to pro.

With the GM Vortec 335 hp engine and the drive-by-wire system, you can simply raise or lower the speed incrementally by pushing an up or down button. This allows you to make minute speed adjustments without ever taking your eyes off the water, which is a plus in the safety department.

Tige' has built its reputation around patented technology that allows it to produce boats with desirable wakeboarding and waterskiing characteristics without having to rely on bulky and complicated ballast systems or higher amounts of horsepower. To the boater this means you don't have to worry about a ballast system breaking down or leaking or having to bring aboard ballast sacks and limit your passengers' comfort. And even though here's plenty of horsepower, you'll usually find that a smaller to midrange amount of power is typically recommended, which translates to a direct savings in operating costs. This boat is a great reason not to purchase new.

We have great, virtually unbeatable, financing, insurance and warranty available and usually can have you pulling it down the street the same day. Don't wait around too long. Call or email sales@rpmsports.com or 830-865-3251.

"IT JUST DON'T GET NO GOODER THAN RPMSPORTS"